I’m sure to most readers it seems only natural that I’d be reluctant to believe that Odious was contacted in a dream by an interdimensional being/living information in the form of the late author, Philip K. Dick. And it’s true—I thought up all sorts of reasons why it couldn’t be the case, all of which seemed completely plausible, unless you happened to know Odious as well as I did, in which case none of them made any sense at all. It’s amazing the lengths the mind will go to—the intricate loops through which it will jump, and the irrational reasoning it will embrace in the effort not to believe something that doesn’t fit within the comfortable confines of its reality programming. I’m ashamed now at how easily I grasped at falsehoods: I turned my sweet, compassionate friend--who had let my lonely, anxious ass come over every single day since the beginning of the lockdown—into someone who would lie to my face and fuck with me for the sake of making art. I made the most clear-headed, hard-working person I knew--who for years had been on a trajectory to become more and more sane and sober--into someone who, without any earlier signs or symptoms, had experienced a psychic break. And finally, when neither of these possibilities seemed to hold up, I decided, in my lowest moment, that they’d created this faker dream to get with something new. In doing so I projected my own pathetic need for validation upon Odious, the one and only person I knew who had never been concerned with being famous or special or sexy.

For two years they’d supported themselves on the modest but steady download revenue of their expertly tagged lo-fi mallwave and drone loop internet DJ streams as well as occasional modelling gigs while they worked on an immense work that they still haven’t shown to anyone, including me. The W.I.P. supposedly combined writing, music and visual art in a “collapsible structure” that is meant to form a fractal of everything in the universe, they explained.

“The goal is to edit down hours of tape and hundreds of pages to just a handful with very specific typography, using black, red and white ink on mostly empty paper, created in sync to a soundtrack composed of found sounds, the buzzing of various machines and long stretches of silence.”

From the outset it seemed impossible, but if anyone could do it, Odious could. I saw them poring over books about Renaissance theories of magic, Dadaism and Finnegan’s Wake. They listened to hip-hop on their Sennheiser’s, especially in languages they didn’t know, so they could concentrate on the “pure sound” of the rhymes. They had a recording mic sticking out of their bag whenever we went out, to capture the sounds of the street, and the vintage typewriters and analogue electronic instruments they collected took over their kitchen. But as time went on and they never showed me any of it I wondered if they’d bitten off more than they could chew… They’re giving up, I told myself, and this dream is going to be the new thing. A mystical adventure to take them away from this embarrassing failure.

I told myself I was concerned but like all my relationships it was really a form of competition, because I can only think of other people in comparison to myself.

And because they were Odious Awry and not given to such petty shit, they saw what I was doing, but instead of telling me to F off like I would have, they made me superfood smoothies (with peanut butter and cacao and organic honey) and invited me to watch old movies, because they knew how much I liked to lose myself in the renditions of long-gone worlds that probably never existed in the first place.

All along I was bringing up this or that point about PKD, about his books and his life, while they nodded blankly. My goal wasn’t to show them I knew they were making the dream up, but just to reveal how much more I knew about these things, and that it was silly for them, a DJ and a model, to front with a legit sci-fi writer like me.

Finally, towards the end of “It’s a Wonderful Life”, when the awakened George Bailey is running to the bridge, they hit pause and broke it down.

“It’s not about all these details, these scholarly footnotes and citations. It’s not about whether it was the ‘actual’ PKD in my dream because there’s no such thing—there are people who have the version of him that they knew, either from so-called real life or extrapolated from his books that they read. It’s always different, always changing, just like it is for everyone. The you that you think you are is not the same you that I know. How could it be?”

They ran both hands through their teal hair, so that it stuck up in a perfect swirl like an ancient greaser.  Their sleeves were pulled all the way up revealing the tattoo drafts they’d drawn over the inside of their arms with a blue ballpoint pen.

“What showed up in my dream was a message from a form of PKD that has seeped into the cloud of signs and signals that we commonly refer to as popular culture. He irradiated that shit, not just with his books, but with the movies made from his books, and then in the dreams people had after they watched the movies or in the trips they had while they were playing in the background. I mean, there must be a million LSD journeys that happened with Blade Runner playing in the background. And all those ideas and images and hallucinations changed the film. As well as the person we know of as PKD. It catalyzed one of many future versions of him, a cyborg like us with our phones, looking up IMDB pages filled with filmographies. But here’s the thing: in each of these versions there’s something that’s the same —a totem, or an interdimensional calling card reminding us that we’re inside a simulation. Something that’s in every book PKD wrote as well as in every interview he gave. It’s not hard to find, once you know how to look for it, but don’t think it will be a sentence you can underline. This isn’t college—there won’t be an exam for this course. It leaks out of photos of him, pouring forth from that big bear chest.”

(at this they chuckled softly)

“What’s always the same is the realization that our lives are more expansive than they seem. It’s his message of hope to the poor kids with their heads against their pillows, grasping at something more than their little lives. The books and movies and ideas—the information that is PKD—seems at once very strange and very familiar, because it’s hinting at aspects of who they really are—who we are. It’s our message too, SWIM. He’s telling us that we’re giants, stronger than the sun—PKD, you and me and the kids. We’ve already done all this. We’re gods from the future, which is not a linear event in time, but an idea that exists in the eternal NOW.”

And with that they hit play again, not waiting for me to respond.

“This is my jam,” they said, “Listen,” and they turned up the volume so we could hear the sad serious song as George clutched his hands together on the bridge, begging the angels for his life back, begging to live again. And the snow came down softly, the way it always did.

sign up for free to get future posts and love letters sent directly to your email.

Now the full extent of my carelessness and conceit was made apparent as Lil Mountain and I fell to the floor–my deer tail and lizard teeth necklace rattling like an exquisitely worded curse.
Jan 18, 2023
8 min read
Dec
20

But as far as I know I’m the only one who took a direct hit. The Babies saw Behemoth, they caressed and polished him in awe, but once it was determined that he didn’t work, they quickly lost interest. I know it’s only a matter of time before they rediscover him.
Dec 20, 2022
10 min read
May
26 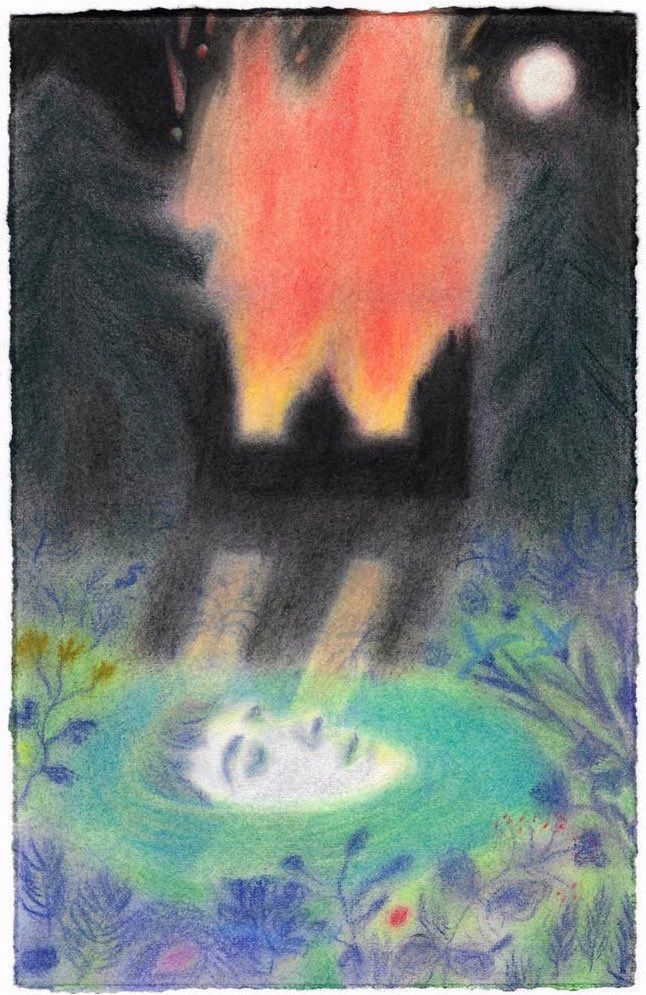 a stone in a stream

I lay there, feeling other versions of myself on other timelines that rippled out and occasionally intersected with one another, stretching into infinity.
May 26, 2022
9 min read
Feb
24

I’d stay dis-ease free...I stared into space listening to synth alpha waves on my headphones as I mutated into a newer and possibly scarier variant of myself.
Feb 16, 2022
7 min read